How to Win as a CIO and Financial Leader – with Bob Fecteau, CIO of SAIC 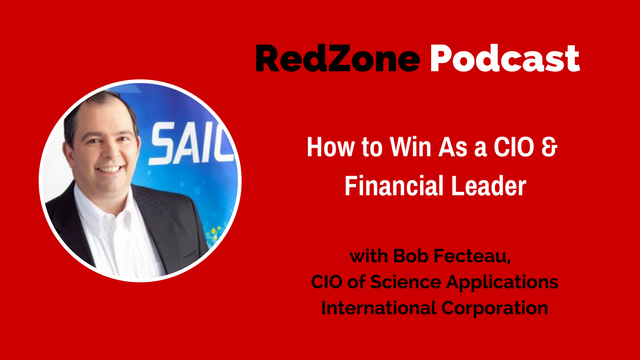 My guest for this episode is Bob Fecteau who is the CIO of SAIC. SAIC is a 15000 employee, $4.0 billion publicly-traded company.

He is one of the four top people who travel to Wall Street to report on the company performance along with the CEO, CFO and COO. He signs off on the SOX control documents for his publicly-traded company.

From my perspective of working with and interviewing hundreds of CIOs, he is a visionary, and is one of the best in the profession. He is a giver who wants to elevate the whole profession and share his wisdom.

I think every early, mid and late career CIO with gas in the tank will benefit from listening to Bob’s perspective as it rang true for me. Here are the quick wins for you. I warn you that you will want to take notes on this one because as I read through the show notes, I had a difficult time choosing which points to put in this list as there were so many. I encourage you to go to the show notes page at www.redzonetech.net to see the show transcript and the links to vendors and programs we discussed.

Here are the highlights from the conversation:

Bob Fecteau is the Chief Information Officer (CIO) for SAIC. In this role, Bob is responsible for guiding technology investments and delivering operational services in direct support of the business. As the CIO, Bob focuses on the efficiency and effectiveness of enterprise IT operations in support of both internal business needs and customer support processes.

Bob also serves the technical community as an executive board member of CIO Magazine’s CIO Executive Council and a judge for their annual One’s To Watch program. He also works as a mentor within the Pathways Program and teaches Enterprise Architecture and IT Leadership at Carnegie Mellon University’s Executive Education Program.

Bob’s technical and leadership acumen has also been recognized by industry peers. In 2009 he was selected as one of the top 100 IT Leaders by Computerworld Magazine and in 2004, he received Government Executive Magazine’s Grace Hopper Government Technology Leadership Award for his efforts in breaking down barriers between government and industry through the use of the Army Contractor Automated Verification System (ACAVS). The ACAVS system has continued to deliver outstanding savings for the U.S. Army and contract companies in support of intelligence missions.

How to get in touch with Bob Fecteau:

Where to Develop Additional Learning: