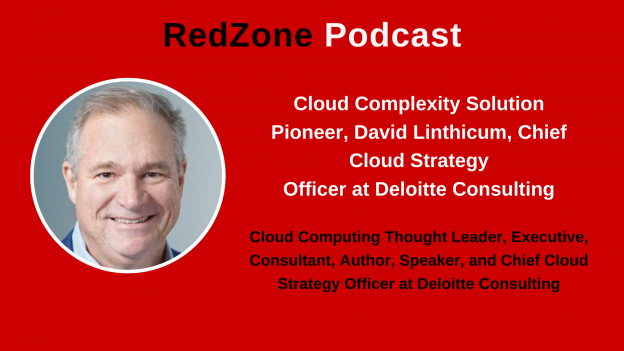 My guest today is David Linthicum. David Linthicum is the Chief Cloud Strategy Officer at Deloitte Consulting and has been named the #1 Cloud Influencer via a major report by Apollo Research. David is a Cloud Computing Thought Leader, executive, consultant, author, and speaker, who has been a CTO five times for both public and private companies, and a CEO twice in the last 25 years.

Few individuals are true giants of cloud computing, but David’s achievements, reputation, and stellar leadership have earned him a lofty position within the industry. It’s not just that he is a top thought leader in the cloud computing universe, but he is often the visionary that the wider media invites to offer its readers, listeners, and viewers a peek inside the technology that is reshaping businesses every day.

More specifically, David is a Gigaom research analyst on cloud computing and enterprise applications and writes prolifically for InfoWorld as a cloud computing blogger. He is also a contributor to, IEEE Cloud Computing, Tech Target’s SearchCloud, and SearchAWS, and is quoted in major business publications including Forbes, Business Week, The Wall Street Journal, and the LA Times. David has appeared on NPR several times as a computing industry commentator, and he also does a weekly podcast on cloud computing.

With more than 13 books on computing, more than 5,000 published articles, greater than 500 conference presentations, and numerous appearances on radio and TV programs, David has spent the last 20 years leading, demonstrating, and teaching businesses how to use resources more productively while continuously innovating.

When I talked with David, he had recently written a great article that I loved, Cloud security secrets your cloud provider doesn’t want you to know. Asking the obvious question was a perfect starting point for our conversation because I really wanted to know – What are the secrets some of the providers don’t want you to know?

I’m excited for you to tune in to this compelling interview.

Here are some questions answered in this podcast.

How to Connect with David Linthicum:

Cloud security secrets your cloud provider doesn’t want you to know. Cloud security seems like something specific to a cloud provider, but emerging approaches and technologies are changing the game. 4/17/20
Are you Ready for the Brandpocalypse? by David Linthicum. Published on LinkedIn, 8/17/19

You can go to the show notes to get more information about this interview and what we discussed in this episode. Click here to download the full transcript.