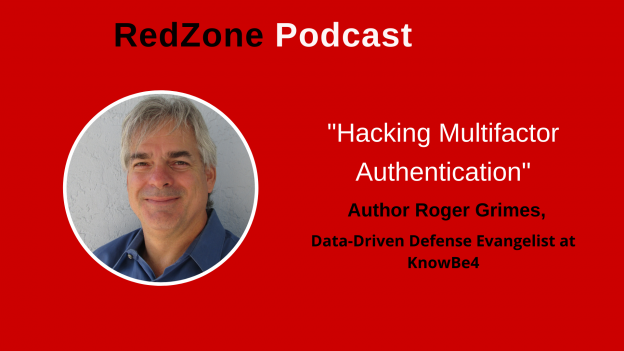 Roger Grimes‘  expertise in the field of computer security is unparalleled. He describes himself as the best in the world when it comes to computer security defense- and he has the credentials to back up this assertion.

He works with Kevin Mitnick who he calls the best Offensive Security guy in the world, but he calls himself the best when it comes to Defense.

With more than 40 computer certifications and twelve books authored or (Co-authored) on computer security, Roger has spent over three decades imparting his knowledge to audiences worldwide.

His current title is Data-Driven Defense Evangelist at KnowBe4. He is the author of the new book, Hacking Multifactor Authentication.

In this time of remote workforces and distributed endpoints, Roger advocates for Multi-Factor Authentication. However, MFA is not the end all be all for security. The vast majority of hacking doesn’t care about your MFA. It’s all about reducing your risk, according to Roger.

Throughout his many years in the industry, Roger a universal mission that drives all of his actions- to make the internet a safer place. Roger says if he leaves the Earth without accomplishing that feat, he has failed.

I also provide how you can connect with him on Linkedin. He has over 25k followers.

We’ve been sold by the industry that MFA is a Warm Blanky and Panacea for all security ills.

I’m excited to share this conversation with such a distinguished and world-renowned Security Defense Specialist.

Here are useful topics, books, and resources discussed and what you will learn as you listen:

How to Connect with Roger Grimes:

Books Published by Roger A. Grimes Referenced in Podcast:

You can go to the show notes to get more information about this interview and what we discussed in this episode. Click here to download the full transcript.